Reconnecting to my roots: a personal essay by Nauya Vidahl 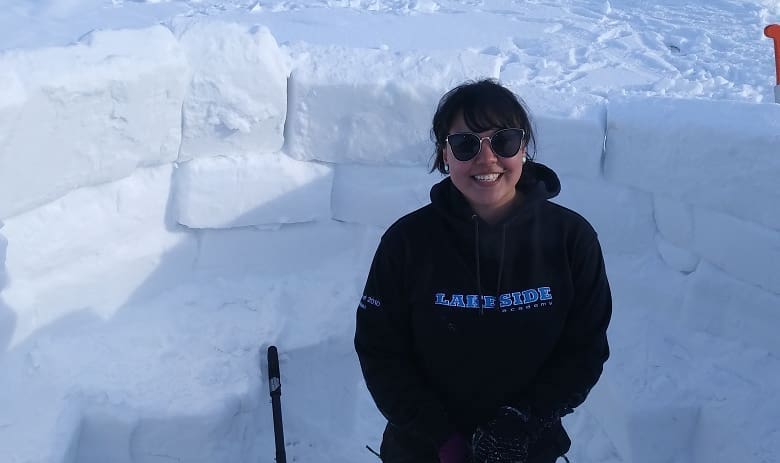 During March Break, Nunavik Sivunitsavut first cohort spent a week in Kangiqsujuaq as part as their Survival Week. The experience proved to be both eye opening and profound. Read about Nauya Vidahl, first year Nunavik Sivuntsavut student experience through a personal essay where she reflects on her week up north, what it means to be Inuk and the personal transformation she experienced.

Just after March break, Nunavik Sivunitsavut took a trip to the north, to my hometown of Kangiqsujuaq. This trip was a part of the gym class so we went to learn some on the land skills. We learned about skills that ensured the survival of Inuit for many generations. In today’s day and age, living conditions changed and many of these skills are no longer necessary to ensure the day-to-day survival if Inuit. As a result, some of these skills are not taught to many Inuit youths anymore. Getting the chance to learn the tricks Inuit knew for decades was truly interesting.

Kangiqsujuaq is a beautiful village surrounded by mountains. Though it is my hometown, there were some things I never had the chance to do when I was growing up, like hiking up one of those mountains. I had gone up most of them when I was a kid, but an opportunity to climb up that particular mountain never presented itself in the past. As a person who likes to keep active, and loves to go hiking, this was a wonderful challenge. I have never really gone hiking in cold climate before, so I don’t think I was dressed quite right. I wore a big parka and a sweater, so I would sweat easily, take my jacket off, but would get cold quickly if we stopped for breaks and have to put my big parka back on. This cycle just kept repeating.

One of my favourite parts of the trip was lighting the stone oil lamp, the qulliq. We had the pleasure of having Ijuka Pinguatuk teach us how to light the qulliq, and she was telling us about the history and importance of the qulliq in the past. Listening to her speak while playing with the qulliq, or watching my classmates lighting it up was so pleasant and peaceful, I could have fallen asleep. Ijuka was talking about how women would keep the qulliq lit all winter long, how it was vital for the survival of Inuit, and just how important the qulliq is to our culture. This tiny little stone lamp was a huge reason Inuit were able to survive the cold north for generations. She talked about how men would take a smaller one so that they could have warmth, light and something to cook with while out hunting for days, or weeks. They needed it to be small so that it was easier and lighter to take with them on their dog sleds. The pride I felt while lighting the qulliq as an Inuk woman was almost overwhelming. I felt excited and couldn’t wait to tell my mother. Another item on the bucket list checked off.

When you think of Inuit, igloos tend to come to mind. Before this trip, I had never built, or stayed in an igloo. In Kangiqsujuaq they build a cluster of igloos every year and some people sleep in them, so I have seen them built before, though I had no clue just how difficult building an igloo really is. Nyomi Gordon and myself had attempted to build ourselves an igloo on our trip. Our instructors were busy building the igloos where our group would spend the night, so we had to get help from our classmates. My hands and forearms were tired from holding the panak with a pair of frozen gloves, my muscles all over my body was aching from lifting the snow blocks, which are heavier than I had expected, and I was absolutely exhausted from the hard work. Even after working all day on building our igloo, we had only managed to finish half of the igloo. Igloo building half checked off my bucket list, but I’ll take it.

That night we got to sleep in the two igloos the instructors had made, and the local guides had set up a tent as well, for us to sleep in if we wanted to. I could tell my classmates and I all wanted to sleep in the igloo, so that we could say we have. We all piled into the two igloos and slept pretty cramped up in there. Our igloo did not have a qulliq, and I had a pretty small sleeping bag, so I was absolutely cold throughout the whole night. My fingers, nose and especially my feet felt frozen; I slept poorly. I honesty kind of feared for my toes, but I was being a stubborn Inuk refusing to go into the tent with the heat stove and stayed in my igloo. With all that being said, I do not regret it. I again felt so proud of myself. Though I did not build the igloo we spent the night in, the simple act of sleeping in one made me feel more rooted, more connected with my ancestors and my culture. One more thing off my bucket list.

We had attempted to go fishing, but no one in my class caught any fish. We attempted to go mussel picking, but the location we had identified was completely frozen over and we couldn’t pick any mussels. Though both endeavors ended up being fruitless, I still enjoyed the two days out on the land. We drove out on skidoos for about 2 hours out of town to go fishing, and about an hour out of town to go mussel picking. All that time spent soaking in the mountains, the landscape, enjoying the simple fact that I was out of the city, out in the middle of no-where, surrounded by nature. Living in the south, in the city, it gets tiresome to only ever see man made buildings. Living in the city, I don’t get to go out in nature too often. Those two days were very important to me. Seeing the mountains around Kangiqsujuaq always fills my heart with happiness, it makes me feel recharged.

Reflecting on our week-long trip, it further affirms my beliefs of how strong Inuit are and have always been. The effort it took to survive in the north without modern technology is no small feat. I worked damn hard on that igloo, and only managed to build half of it. We attempted twice to get some food, and came out empty handed both times. Inuit in the past would often go out hunting for days, or weeks, looking for something to eat, and just like us, it was sometimes in vain. The women who stayed at the camps would have to carefully ration out their food supplies, their oils, and moss to make sure that they don’t run out before the men came back with more. The resilience of Inuit is so apparent.

As hard as it was to live in the north, Inuit did not just survive the north, they thrived in it. Inuit found ways to live in the cold, ways to distract themselves from the cold and their hunger, they learned how to follow the migrations of the animals, and to this day, qajaqs, or kayaks, are an Inuit made technology still widely used around the world. I think that the rest of the world could learn a lot from Inuit. The tools Inuit made to survive with the minimal resources they had is astonishing. It takes a lot of brains to be able to survive the north with so little around you, especially considering that there are no trees in Kangiqsujuaq so they did not even have fire wood in most parts of Nunavik. They utilized the little bit of resource they had and made it work.

As a modern-day woman, the thought of living like that is quite intimidating, and for good reasons. There are still Inuit that live off of the land; they prefer to go hunting to make a living rather than working a Western type of job. This warms my heart. You have to be tough to live in the north the way Inuit have in the past. You need extensive knowledge to master the science of the land, the animals, the seasons, how to gut and skin animals, and so much more.